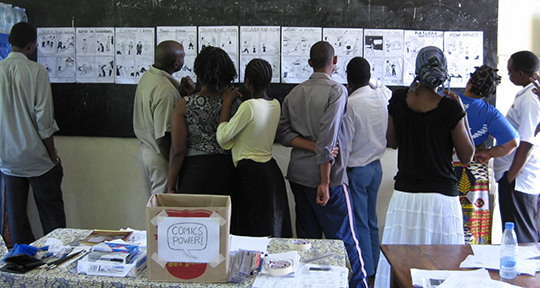 Grassroots comics have been used by organisations to focus on different issues, such as racism, sexual harassment, girl child rights, school drop-outs, hiv/aids, sanitation, and right to education. These are just a few examples. Any issue, on which one can make a story, can be expressed through grassroots comics.

World Comics Finland was invited by the Association for Peace and Human Rights (APDH) to arrange a tutor-training comics workshop in Ngozi in July 2010. After the training, APDH has continued to use comics in the work with local groups in Northern Burundi. They have made wallposter comics on issues such as land rights, food and nutrition problems, domestic violence, etc. 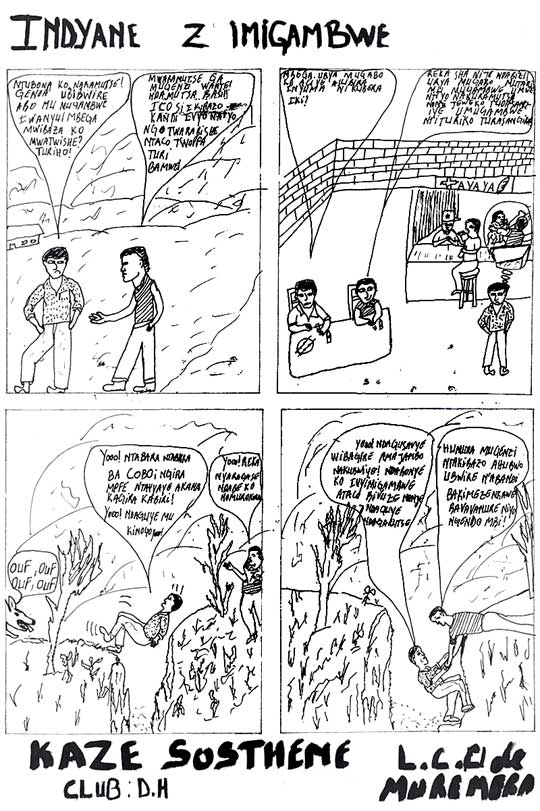 The language of the attractive comic above is Kirundi. It was drawn by Kaze Sosthene of L.C.Club de Muremba. The story is about a man who has strong negative feelings towards his political opponents. He thinks they want to harm him. However, one of them comes to his help when he is chased by a rabid dog.

After initial training on grassroots comics in a workshop in Kenya in 2011, grassroots comics were tested as a campaigning tool in Youth Alive! Kenya, KAPLET, KCBO-NET, INUKA, and Gay Kenya Trust, all community organizations working mainly in Nairobi. The comic below is about the limits of political tolerance: 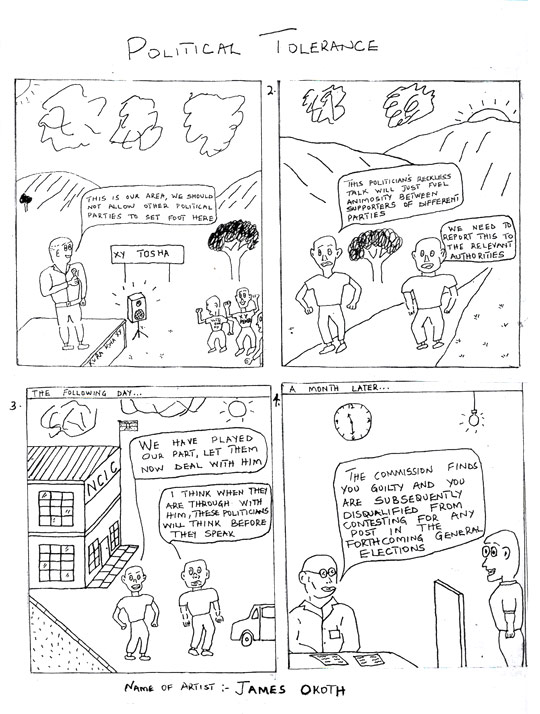 Summary of the story: A politician uses inflammatory language at a rally. Two citizens are concerned about the possible effects on the peace and stability of the country, and report the politician's behaviour to the National Cohesion and Integration Commission (NCIC). The commission disqualifies the candidate from taking part in the elections. 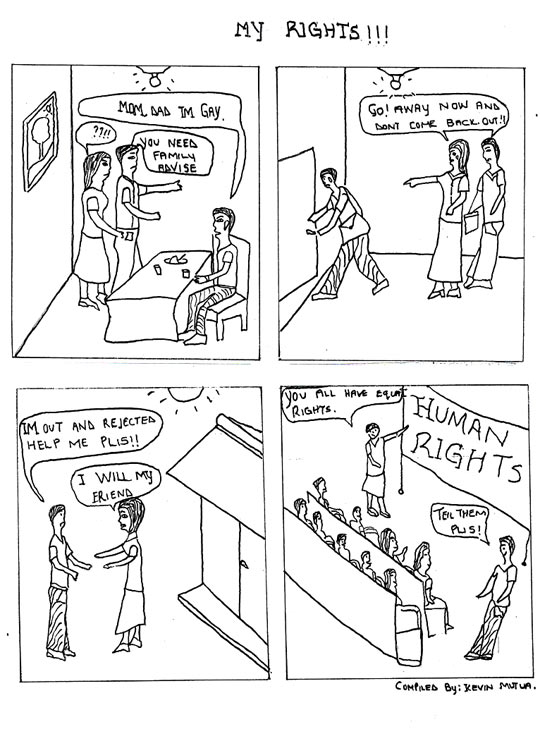 This comic is about the plight of gay people in Kenya. Summary of the story: A boy tells his parents that he is gay. They get shocked and throw him out. The boy is supported by his friends who accept him as he is. The last panel points out that gay people have the same rights as everybody else. 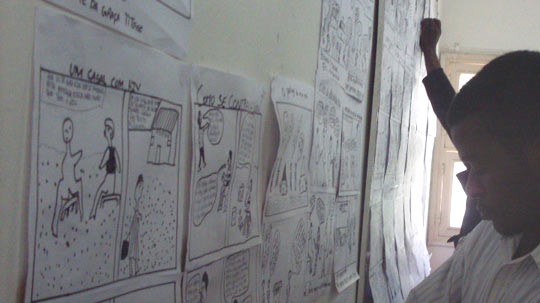 The themes of the Nhamatanda comics cover issues such as cholera prevention, hiv/aids, malaria control, education for girls. Below a comic on malaria: 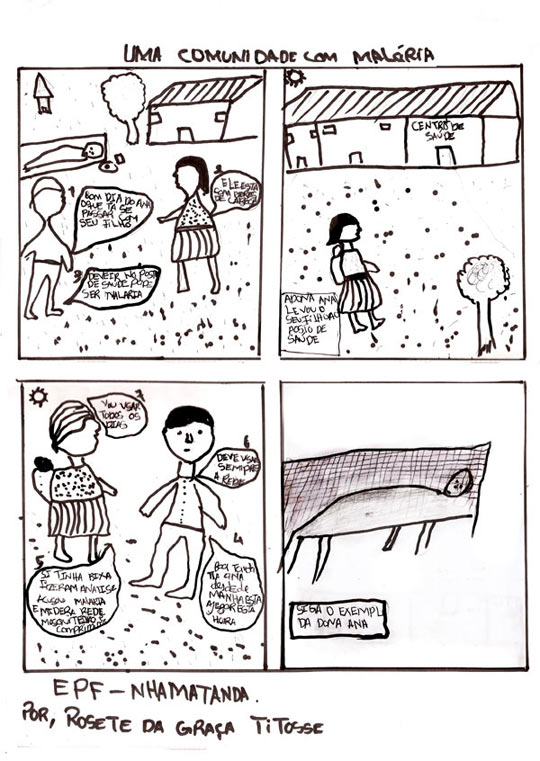 A community with malaria. Dona Ana goes to to the Health Centre and gets nets to keep her safe from mosquito attacks. In the last frame the artist exclaims: Follow the example of Dona Ana! 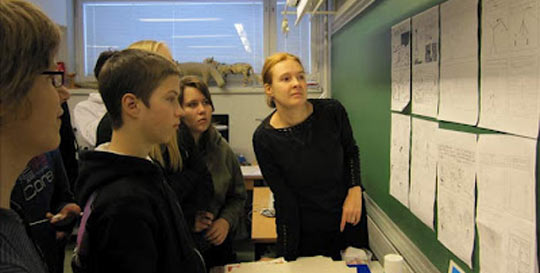 4. Comics as a global education tool in schools in Finland

The Youth Academy (Nuorten Akatemia) of Finland receives funding from the Finnish Foreign Ministry's development education funds for a grassroots comics project in which students, aged 13-19, make 4-panel comics about their views on global development. The comics are made during a three-hour workshop in the class.

The project is a joint effort between the Youth Academy, World Comics Finland, and some other NGOs, and it has been running since 2009. Several hundred school visits have been realized. Below a story about child labour made at Kuulampi school in Tyrnava, Finland.

A similar project took off in Estonia in 2012 as a cooperation between Mondo, Estonia, the Youth Academy of Finland and World Comics Finland. 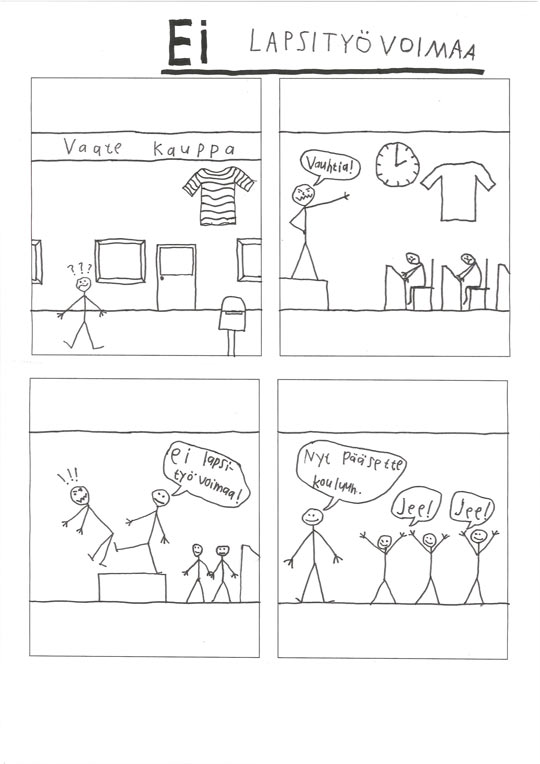 No to child labour. A customer, drawn as a stick figure, reflects over child labour in a shop selling clothes. The clothes trade is one of the central themes in the global education campaign.

World Comics Finland ran a grassroots comics training workshop for a cooperation project between the Finnish Psychologists for Social Responsibility (FPSR) and a Palestinian Refugee organization, Beit atfal Assomoud (BAS) in Lebanon in 2005. Since then, the organization has produced comics on several occasions. Again, the skill has spread from the original workshop participants to youth activists in many refugee camps. Below a comic from 2006: 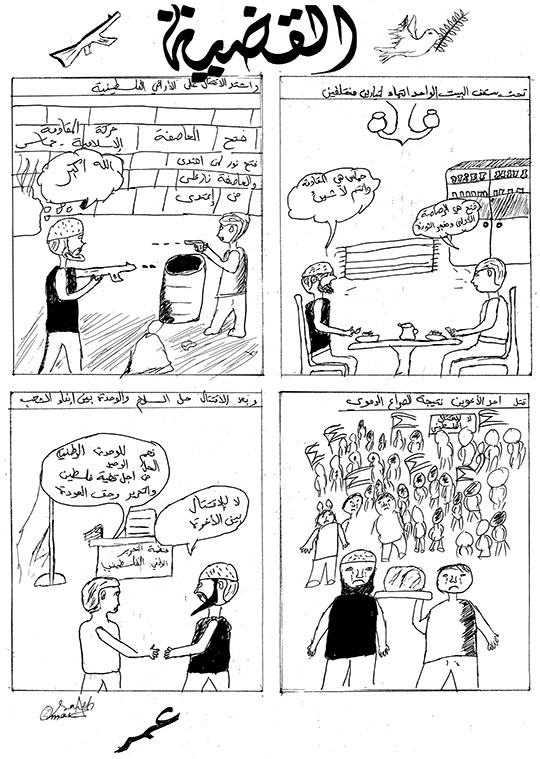 Bitter words. (Note: Read from right to left) The Palestinian factions negotiate with each other, but only bitter words are exchanged. Their fighting continues and escalates, many people die. When burying their comrades, the factions understand that only by negotiating seriously they can achieve peace between the groups.
Story and Art by Omar Saleh, Beit atfal Assomoud, Lebanon

AMWCY had a grassroots comics training workshop in Benin in 2005. It was facilitated by World Comics Finland with funding from Plan Finland. After the training, AMWCY has arranged workshops, mainly in West Africa. The movement often uses grassroots comics in their internal publications and on their website (www.maejt.org). The comics take up mainly human rights issues from the perspective of the youth. Below an example from Nigeria: 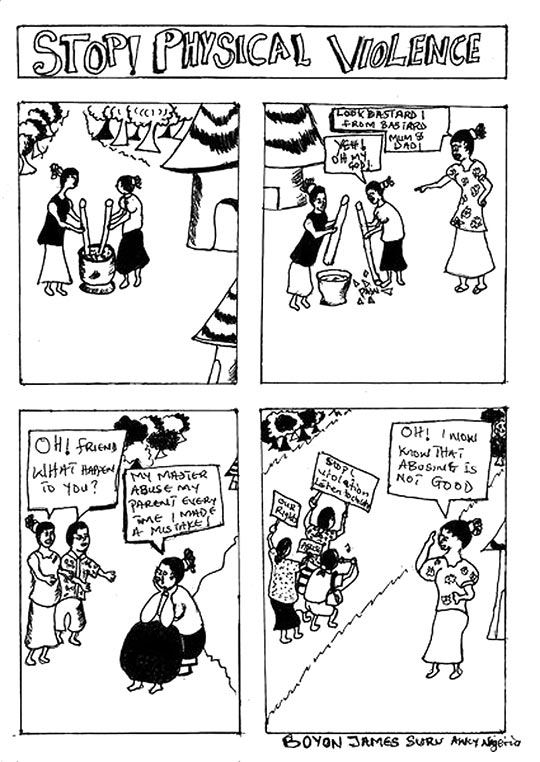 A young maid is physically abused by her employer. She complains to the local AMWCY group which takes action. The employer has to correct her behaviour. 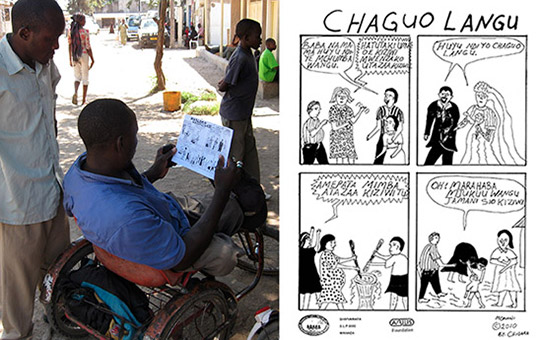 7. The rights of the disabled, Mwanza, Tanzania

8. Life as experienced by the mentally handicapped, Finland

Open Minds - a group of mentally handicapped women took part in a grassroots comics workshop at the VNF-Folk High School in Karis, Finland. Their comics tell vividly, and often with humour, about how they look at their lives. There are stories about love and marriage, hobbies and leisure time, the routines of the group accomodation, and some philosophical stories. Below is a sample of one of the comics.

Again, grassroots comics proves to be a great tool for communication. The method is easy and it helps people to express themselves in a way that gives them great satisfaction. 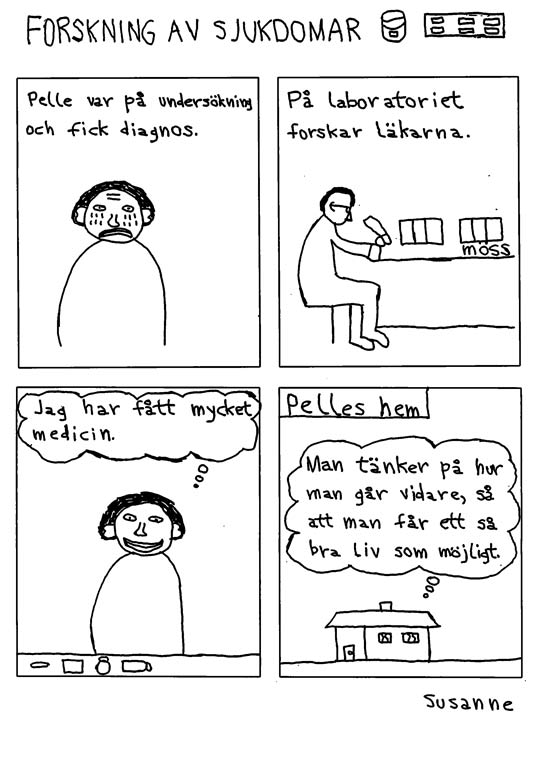 Research on diseases. Pelle is diagnosed at the hospital. There doctors study the diseases and research them. Pelle gets a lot of different medicines. In the last panel he is at home and thinks: one has to move on and try to have as good a life as possible. Story and art by Susanne.

SIL International runs a mother tongue language program in Azerbaijan. They arranged in 2012 a five-day grassroots comics workshop for youngsters in a mountain village. The children made comics about the winter and about the rain.

Grassroots comics is an attractive component in programs that promote the use of language and reading. This has been evident in many workshops where the participants have always been happy to use the local language.

Ms. Elsa Sysser, who ran the workshop, had not received any comics training herself, but made use of the book Grassroots Comics - a development communication tool to guide her through the process. By trying it out step by step she managed to get the children to draw comics.

The comic below celebrates the rain and the good harvest that follows. Story and Art by Ayatac. 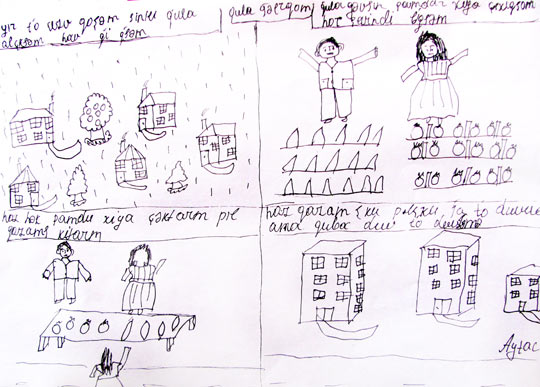 From 1997 to 2010, World Comics Finland had extensive cooperation with India starting with Village Community Development Services, Tamil Nadu, in 1997, and later with World Comics India, Delhi, which was established in 2002 (www.worldcomicsindia.com). 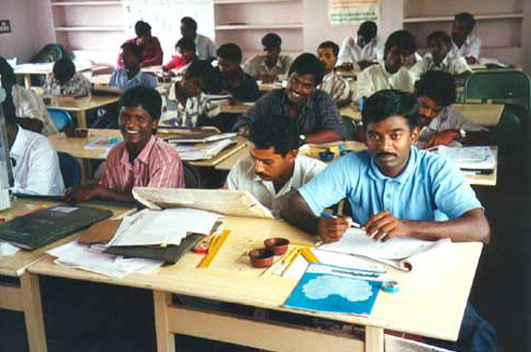 Tamil Nadu, India. Our first workshop in 1997 in Karasanoor. Here we discovered the power of grassroots comics.

From our training of grassroots comics trainers- workshop in Nagar, Rajasthan in 2009. This was our last workshop in India.

A village wall in Rajasthan, from a cooperation project by World Comics India.

A bus stop in Goa. From a cooperation project by World Comics India. 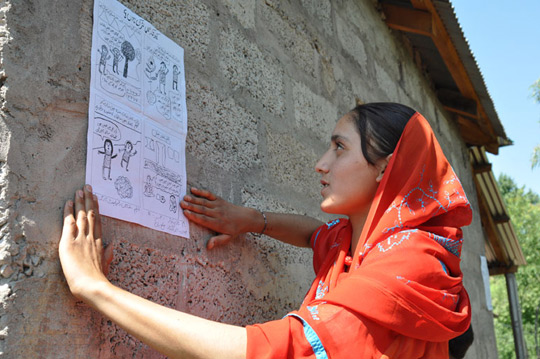 Kashmir, Pakistan, from a workshop for strenghtening participation of women in the society. 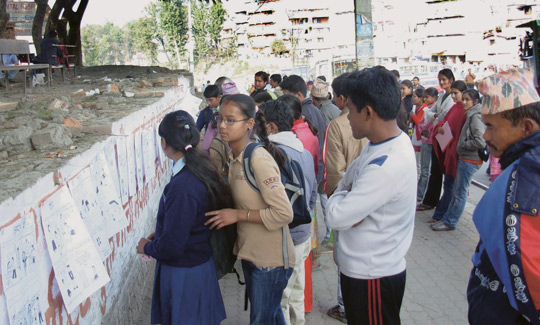